Call us
Shop by category 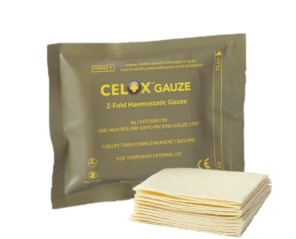 Celox ™ Gauze Z-Fold is the newest creation from the Celox™ range. The new compact Z-Fold gauze is easier to work with and is easy to carry.

Celox™ Gauze Z-Fold Haemostatic Dressing are the newest addition to the Celox™ range. The new compact Z-Fold gauze is easier to work with and is easy to carry.

The Celox™ Gauze Z-fold is the new smaller, slimmer and easier gauze. The 5ft length gauze will work as effectively as other 12ft length gauzes. It has been tested in controlled environments and in action with results showing lives can be saved with the use of Celox™.

The shorter and more versatile gauze is easier to handle and reduces application time. Only weighing 34g and now being a slimline pack, more packs can be carried at once

The only haemostatic gauze used by the UK Ministry of Defence and the haemostat of choice by multiple NATO forces.

There are no reviews yet.